The observer design pattern is yet another, one of my favorite design patterns which falls in the category of “behavioral pattern“. Going by its name, we can say that observer is something (objects in case of OOPS) which islooking upon (observing) other object(s). Observer pattern is popularly known to be based on “The Hollywood Principle” which says- “Don’t call us, we will call you.” Pub-Sub (Publisher-Subscriber) is yet another popular nickname given to Observer pattern.

Based on the “Hollywood principle”, we can make a guess that in observer pattern, there is a special Hollywood celebrity object in which all other common objects are interested. In actual terms in the observer pattern – “There are n numbers of observers (objects) which are interested in a special object (called the subject). Explaining one step further- there are various objects (called observers) which are interested in things going on with a special object (called the subject). So they register (or subscribe) themselves to subject (also called publisher). The observers are interested in happening of an event (this event usually happens in the boundary of subject object) whenever this event is raised (by the subject/publisher) the observers are notified (they have subscribed for the happening of this event- Remember?)

Simple concepts can be made complex by writing unnecessary literature about that. Let’s dig into an actual example and code to clear everything about observer pattern. Consider an online electronics store which has a huge inventory and they keep on updating it. The store wants to update all its users/customers whenever any product arrives in the store. Just reading the problem statement, we can fit in Observer pattern for the above problem-How? The online electronic store is going to be the subject. Whenever the subject would have any addition in its inventory, the observers (customers/users) who have subscribed to store notifications would be notified through email. Let’s look at the code straight away to get an idea of how we can implement Observer pattern in C#.

The “Subject” maintains a list of “Observers”. Since every Subject would have somewhat these methods, I tied those in an interface. The Subscribe–Unsubscribe method are the ones through which the Observers register-unregister themselves to the Subject. The Notify method is the one which has the responsibility of notifying all the Observers.

Let’s look at the code for the Observer class:

Let’s look at the main method which would complete our code for using the Observer pattern.

This Main method is straightforward. We create an instance of Subject so that we can subscribe/unsubscribe different observers. When the inventory in the Subject changes, we notify the Observers by their Update method (look at the code in Subject class).

Below is the output of the program…

If you notice that after the first notification since Observer1 has unsubscribed, it would not get notified, when the inventory changes next time. But since Observer3 has subscribed to the list of Observers, it gets notified when there is an update in the Subject. 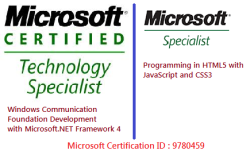